Growing-up in India, I remember many things that were available only to a privileged few. For example, my home was the only one in the entire neighborhood with a telephone! Back then, getting a connection to a wired telephone network was an expensive and drawn out process, sometimes requiring years of waiting for the telephone company to come dig and connect a physical telephone line to a home. 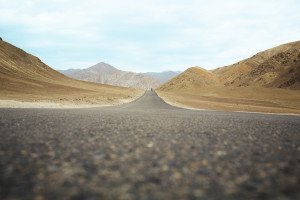 The Rise of Mobile 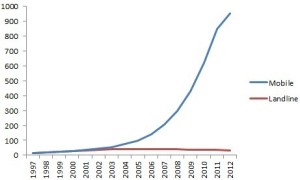 Mobile vs. Landline Use in India Source: http://www.nextbigwhat.com/mobiles-have-killed-the-landline-business-in-india-297/

In the late 90’s, the wireless revolution arrived in India…bringing down the cost of accessing a telephone connection and, thereby, breaking down the barriers to large scale adoption. The result was a country’s telecommunications network that was, by comparison, behind the developed world by at least 50 years to a telecommunications network that had now caught up to that of the developed world in less than a decade! According to a 2010 United Nations report (India has more mobile phones than toilets), more people in India had access to mobile phones than proper plumbing!

The Democratization of Capture

The revolution in cloud and mobile computing is breaking down the same barriers associated with implementing IDC (Intelligent Document Capture) technology. What does IDC technology do? IDC technology is able to automatically identify and classify documents and extract data from those documents. I remember working on large scale automated extraction projects just a decade ago. These projects were complex, highly resource intensive, and very expensive. The technology was cumbersome to configure and required long implementation cycles. Fast forward ten years and what used to cost millions of dollars in investment, teams of IT professionals, and many months of implementation has been reduced to a fraction of the cost and timeline.

5 Ways that Capture Has Come a Long Way

So what has changed? Here are 5 ways that have contributed to the pronounced impact on IDC technology:

IDC technology is inherently a processor intensive technology. Yet, computing power has become cheaper and faster in the past decade. Additionally, the “cloud” allows on-demand computing power during peak processing periods. Organizations are able to scale their processing requirements up or down based on demand which makes implementing and maintaining an IDC solution more accessible and more affordable.

Storage and retrieval of hundreds of thousands of images is essential to implementing IDC technology. In recent years, thanks in large part to Moore’s law, data storage has become faster and cheaper. Newer storage technology, such as solid-state drives (SSD), allows super-fast access to the disk making capture storage easier and more accessible.

Historically, implementing large scale IDC projects have been a challenge from a network infrastructure standpoint. Transferring large image files over a WAN (Wide Area Network) brought its own challenges. More affordable capacity, fiber optics, and LTE all contribute to making it possible to have high-speed access to transfer large-scale amounts of data within an intranet or across the internet.

4. That Document Scanner You’re Carrying in Your Pocket

Most people are walking around with a document scanner in their pockets. Well, not actually a document scanner, but a sophisticated mobile phone. The cameras on our phones can act as a scanner – allowing ad-hoc capture of documents (e.g. checks, invoices, bank statements, bills of lading, etc.) at the point of presentation.

Capture technology as a whole has evolved due in large part because of the advancement to some of the underlying technologies that make capture effective. Advancements in full text search and indexing technology, such as Lucene, and large-scale data storage platforms, like Hadoop, complement Advanced OCR technology to add value to the business case for implementing capture solutions.

We live in a world today where change, especially changes to technology, happen at a dizzying pace. These changes have real and significant impacts to the way we approach our lives and our businesses. Advancements in IDC technology combined with a fundamental shift in the deployment of such technology is creating an opportunity to create products that transcend previous generations of product offerings. Projects that may have been considered beyond the realm of possibility due to resource constraints suddenly become readily available to our own organizations but also to the competition.

Contact MTS Software Solutions to learn more about how your organization can benefit from a capture solution.

Back to School w/MTS
Happy “Clean Your Virtual Desktop” Day!